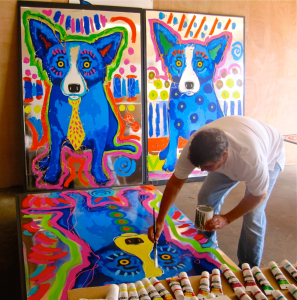 Join George Rodrigue’s Family on January 26, at the Bayou Teche Museum as we unveil “Shiny Happy Blue Dog,” a new exhibition of original late works on chrome by George Rodrigue.

When George Rodrigue was nine years old he was diagnosed with polio, and was hospitalized for six months in 1952.  He spent much of this time with the new invention of paint-by-number sets, turning the panels over to paint his own designs of creatures, monsters, and cars.  During his hospitalization, Rodrigue recalled the rows of kids in iron lungs in the hospital wards.  It was this memory that inspired him to create a series of Blue Dogs on chrome paper, purposely created in a way that allowed the silver to show through, providing a reflective surface for the children to engage with the work.

In the 1950s, it was the movies more than television that influenced the youth of America, including young George Rodrigue (1944-2013).  For him the single greatest movie experience of this life occurred in 1954 with the release of The Creature from the Black Lagoon, an event unparalleled in the eyes of a ten-year old boy, seeing it for the first time at the Evangeline Theater on Main Street in New Iberia, LA.

Coinciding with their 2017 Gala, the Bayou Teche Museum will present a collection of these contemporary chrome works, including a Creature from the Black Lagoon, a chrome piece created for his own collection.