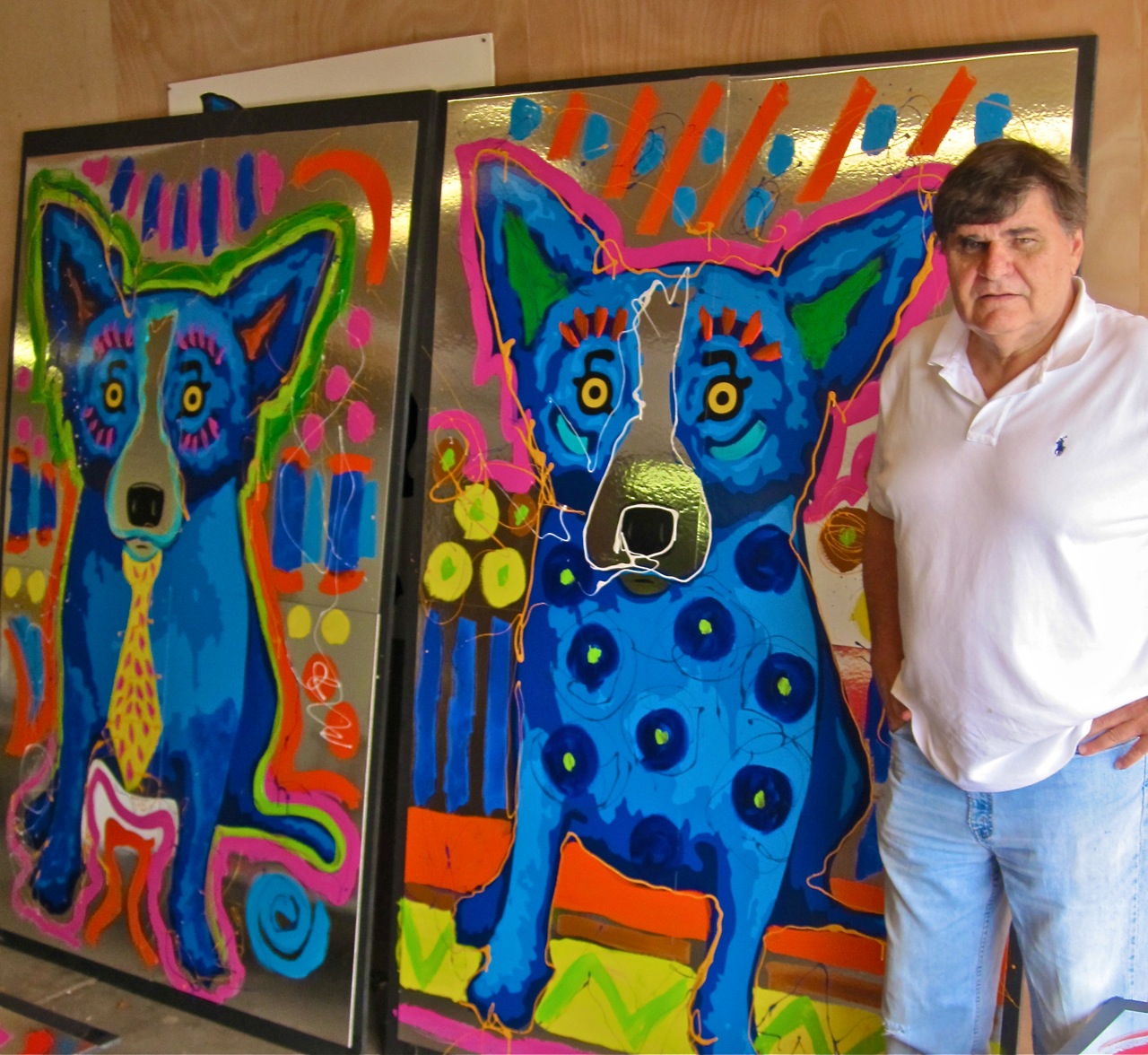 Spanning   Rodrigue’s entire oeuvre, including Landscapes, Cajuns, and Blue Dogs, as well as selections from Hurricanes, a series of abstract works.

The New Orleans Museum of Art

www.noma.org
Download the January 2008 issue of Arts Quarterly (a NOMA publication) for more information on the exhibition. download

In conjunction with the 2014 Louisiana Book Festival on November 1, 2014, which is dedicated to his memory, the exhibition features Rodrigue’s Louisiana Legends.

Visitors to the Louisiana State Archives will have a chance to view a collection of iconic Blue Dog artwork by acclaimed Louisiana artist George Rodrigue.

November 2, 2013- December 2013, special exhibition at the State Library of Louisiana, featuring original artwork from The Other Side of the Painting, including works by George Rodrigue from 1957 to today, such as his original Creature from the Black Lagoon, earliest landscapes, and more.

Also on view, works that inspired Rodrigue, including paintings by Mignon Wolfe (Wendy Rodrigue’s mother) and Rosalea Murphy of the Pink Adobe in Santa Fe.

Walker Percy, Sylvester Stallone and the Blue Dog
Portraits of Pulitzer and Nobel Prize Winners by George Rodrigue and on view for the first time…

Located in the Shaw Center for the Arts
http://www.lsumoa.com/
Baton Rouge, LA

The Blue Dog Days of Summer:
George Rodrigue from the New Orleans Museum of Art

Rodrigue’s Acadiana is a collaborative effort between the ULL College of the Arts, the Paul and Lulu Hilliard University Art Museum, Acadiana Arts Council, Acadiana Center for the Arts, Lafayette, LA Convention and Visitors Commission and Lafayette Consolidated Government.

Acadiana Center for the Arts

The Coral Springs Museum of Art

Features the 15 Saga of the Acadians paintings, along with 10 portraits from the Flora Levy lecture Series.

A retrospective exhibition featuring more than one hundred original paintings by George Rodrigue spanning forty years, including Cajuns, Hurricanes, Blue Dogs, and Bodies, along with rare sculpture and glass pieces.

Got Cow? An exhibition of paintings, sculpture and photographs from museums across the U.S., slated from June 24 to September 10, 2006, takes both a lighthearted and serious approach to the animal that has been a favorite subject of artists.  Got Cow? explores the cow’s appearances in traditional landscapes and mythology and then as a subject for artists such as Andy Warhol and Roy Lichtenstein, who were intrigued by the cow’s form, pattern, and use as a symbol of traditionalism in contemporary art. www.hrm.org

The Atheneum (1834) is the historical library on the island of Nantucket.  Rodrigue will lecture from the stage of its Great Hall, where past guestspeakers include Ralph Waldo Emerson, Henry David Thoreau, Horace Greeley, Frederick Douglass, Stephen E. Ambrose, Lisa Norling, Henry Louis Gates Jr., David McCullough, and Nathaniel Philbrick.

Many pieces in this exhibition are from the artist’s private collection, or from collectors of early works, and have never before been seen. Some of the pieces taking center stage are Jolie Blonde and the Aioli Dinner.