Not on social media? Here’s a look at what was happening this past week on the George Rodrigue Facebook Page.

In his classic painting “Mardi Gras Dog” (1991) George Rodrigue paints the dog as though it is a Cajun person, a ghost at eye level, trapped within the artist’s strong design and living within a Louisiana landscape environment. Learn More

Within his own gallery, George Rodrigue painted to please himself, as opposed to an audience or agent. When he did paint for others, it was exciting projects of his choosing, such as Neiman Marcus, the Chicago Cow Parade, and Xerox. 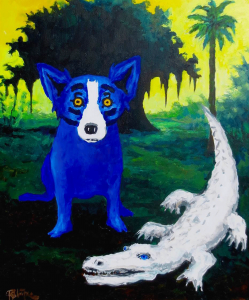 In 1986 seventeen hatchlings became the first white alligators ever recorded, when they were found by chance in the Louisiana swamps. Like many, George Rodrigue was fascinated by this remarkable discovery and viewed the alligators often, eventually painting “Spooked by Bourré” in 1993. Learn more

See the original painting, now on view at Rodrigue Studio, New Orleans. For details regarding price and availability of this and other unique artworks by George Rodrigue contact Rodrigue Studio. 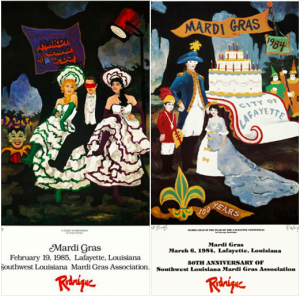 “Although I represented Mardi Gras in my paintings,” explained George Rodrigue, “it was several years before I did a poster. Lafayette Mardi Gras krewes asked if I would illustrate their themes.”

“One of the earliest I remember was Broadway Shows. It turned out to be very successful, because all of the krewe members bought posters. Also, the local people preferred it to my regular Cajun paintings because of the bright colors.”