Take Me Back to Texas

Although this exhibition primarily includes original artwork from the Rodrigue archives and Sanders collection, it also includes a limited number of paintings and silkscreens for sale including, Take Me Back to Texas, a new silkscreen from the Estate of George Rodrigue.

During Rodrigue: Houston the George Rodrigue Foundation of the Arts will host several events in the Houston community.  Learn more about our education outreach here.

Born and raised in New Iberia, Louisiana, in the heart of Cajun country, George Rodrigue rose to fame beginning in 1974 when his painting The Class of Marie Courrege, featuring his mother’s New Iberia school class, won an award at the prestigious Le Salon in Paris, France. This rare honor, especially for an American, prompted the historic French newspaper, Le Figaro, to dub Rodrigue, “America’s Rousseau.” In 1976 Rodrigue’s book The Cajuns of George Rodrigue (Oxmoor House) became the first book published nationally on the Cajun culture. Impressed with the publication, the National Endowment for the Arts recommended The Cajuns to First Lady Rosalynn Carter, who chose the book as an official gift of state from the Carter White House.

During the 1980s Rodrigue received commissions to paint Presidents Ronald Reagan and George H.W. Bush, and later President Bill Clinton, as well as five Louisiana Governors. His original painting of President George H.W. Bush hangs today in the President’s home office in Houston but will be on display in Rodrigue: Houston.

After 25 years of painting Cajuns and Portraits, Rodrigue attracted wider fame and, eventually, critical acclaim for his Blue Dog Series. In 1984 he first painted a loup-garou, or mythological French/Cajun werewolf, a subject that developed over time in both the artist’s mind and on his canvas into the world famous Blue Dog. Rodrigue’s strong design and repetitive imagery were holdovers from his Cajun series, particularly his Oak Trees. “It’s very complicated to paint something so simple,” stated the artist. “I could never have painted the Blue Dog without first having painted 25 years of Cajuns.”

The series developed over time from a red-eyed, wolf-type image in bayou landscapes, into a tighter, abstract, “friendlier” shape, one that the artist used, as he often said, “to comment on life today.” The paintings attracted the attention of Michel Roux for Absolut Vodka, and Young & Rubicam for Xerox Corporation, as well as the department store, Neiman Marcus, which commissioned from the artist three covers for their catalogue, THE BOOK, and used original Rodrigue paintings in their window displays in Houston, Dallas, Honolulu, and New York (Bergdorf Goodman). These collaborations exposed Rodrigue’s artwork to a broad audience and catapulted him to worldwide fame. Throughout, he continued to attract publishers, such as Harry N. Abrams and Rizzoli, resulting in thirteen books published nationally and internationally on his art. 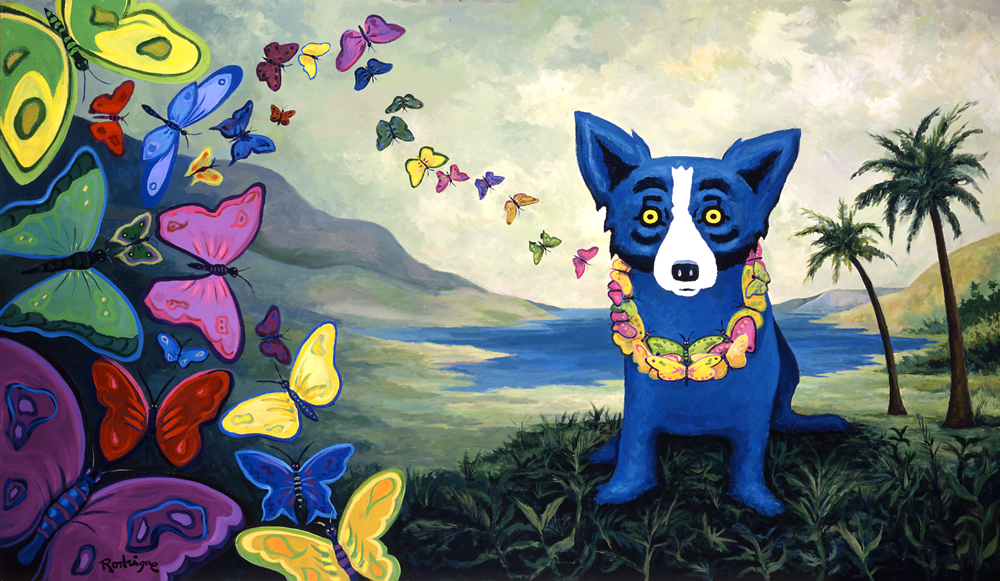 In 2007 the Dixon Gallery and Gardens Museum in Memphis, Tennessee hosted a 40-year Rodrigue retrospective, followed in 2008 by the New Orleans Museum of Art. In both cases, the exhibitions broke those museums’ attendance records for exhibitions spotlighting living artists or contemporary shows.

Throughout, despite public demand, Rodrigue avoided mass production, including products such as t-shirts and stuffed animals. He also declined outside representation for his art, preferring to sell through his own galleries in Lafayette, New Orleans, and Carmel, California; as well as Munich, Germany and Tokyo, Japan. A prolific artist, he painted by his own hand more than 2,000 canvases over 50 years and, in lieu of Blue Dog posters, created some 600 original silkscreen editions.

This special Houston retrospective exhibition includes selections spanning Rodrigue’s entire career. The Rodrigue Family shares paintings from its archives, many of them never before shown outside of Louisiana. The exhibition also includes twenty original paintings from the private collection of businessman and former Houston Astros minority owner Don Sanders, a friend and Rodrigue collector since the early 2000s.

In 2009 Rodrigue, Sanders, and Governor Rick Perry unveiled an 8-foot original Blue Dog painting on chrome for Dell Children’s Hospital in Austin, followed soon after by a similar unveiling at Texas Children’s Hospital in Houston. Rodrigue and his wife Wendy combined these installations with patient visits, art therapy, and readings from Rodrigue’s children’s books, hundreds of which were donated to the hospitals by Sanders. Published in conjunction with this exhibition, a new art book, Rodrigue: The Sanders Collection, features 100 Rodrigue paintings and a foreword by Sanders’s and Rodrigue’s mutual friend, Baseball Hall of Famer, Nolan Ryan.

Although Sanders and Rodrigue became friends in the early 2000s, it was during the 1980s that the artist first developed his fondness for Houston. Selling paintings from the trunk of his car, he made many friends at his favorite hangouts, where he also displayed his art, including Ray Hay’s Cajun Po-Boys, Bonnie’s Steak and Seafood, the Mandola Family Restaurants, and the original Landry’s.

It was at a Houston flea market in 1979 that Rodrigue found the child’s t-shirt for his son André that said “Kiss Me, I’m Cajun.” The resulting painting, on view during this exhibition for the first time in Texas, became one of Rodrigue’s most famous, eventually landing on the cover of the Junior League of Lafayette’s bestselling cookbook, Talk About Good. “When I found that shirt in Houston,” said Rodrigue, “I knew that the Cajun culture was finally becoming known outside of Louisiana.”

Grateful to M.D. Anderson Cancer Center for their care of his cousin, Cheryl Courrege Burguieres (1944-2005), wife of Philip Burguieres, Vice Chairman of the Houston Texans, Rodrigue collaborated with Cheryl in 1999 on the book One Centimeter, chronicling Cheryl’s decade-long journey with breast cancer. The cousins attended book signings and events together in the Houston area, donating all proceeds from One Centimeter to M.D. Anderson. The following summer, Rodrigue and his wife Wendy presented a live painting demonstration and lecture during a three-day exhibition of his paintings. The artist auctioned the painting impromptu before a shocked and emotional 500 on-lookers and, following a bidding frenzy, turned over the hefty check that night to M.D. Anderson.

It was this event that helped Rodrigue understand the philanthropic potential of his art. In the following years he used his artwork to raise millions of dollars for both the arts and humanitarian causes following September 11, 2001 and Hurricane Katrina in 2005. This eventually lead to his founding the George Rodrigue Foundation of the Arts in 2009.

Following his childhood in New Iberia, Rodrigue attended the University of Southwest Louisiana (now the University of Louisiana at Lafayette), followed by the Art Center College of Design in Los Angeles, California. He returned from art school to Lafayette, Louisiana, where he owned a gallery and lived for thirty years before moving in 2000 to New Orleans and Carmel, California.

It was in Houston, however, that Rodrigue spent much of the last 18 months of his life, undergoing treatment for lung cancer at Methodist Hospital. The artist grew close to many of the hospital’s health care workers, as well as patients and families. The Rodrigue Family is deeply grateful for the outstanding care George received, including, across the board, the dedicated, kind, and discreet staff and volunteers at Methodist Hospital. It was there, in waiting rooms and doctor’s offices, that George Rodrigue made some of his most treasured Houston friendships.

“It is for all of these reasons,” explains Jacques Rodrigue, Executive Director of the George Rodrigue Foundation of the Arts, ”that Houston is the perfect place to extend Education Outreach through our family foundation (est. 2009). And without question, Houston is the best venue for our first satellite retrospective of my dad’s art.”

Learn more about the life and art of George Rodrigue at Wendy Rodrigue’s blog, featuring more than 200 essays on the artist, with quotes. www.wendyrodrigue.com.