The Family of Artist George Rodrigue presents “Louisiana Graveyards,” a collection of original paintings, drawings, silkscreens, and photographs by George Rodrigue ranging in date from 1971 to 2013.  This unprecedented exhibition includes fifteen original artworks borrowed from private collectors and the Rodrigue Archives. 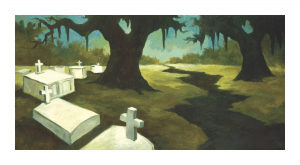 Saints on the Bayou, 2015; Original Silkscreen Designed by George Rodrigue and Released Posthumously, 22×40 inches, Estate Stamped and Numbered Edition of 250, $500* (*price subject to change without notice)

Background:  Rodrigue’s parents were the youngest of a combined 24 siblings.  As a result, young George grew up attending funerals.  He recalled his mother white-washing the tombs of her parents on All Saints Day, and he often helped his father in the family business, “Rodrigue’s Portable Concrete Burial Vaults.” READ MORE

He also grew up in a Cajun-French and Catholic community that produced strangely beautiful Cities of the Dead, a description often applied to cemeteries in south Louisiana where, due to the high water table, the dead rest above the ground in concrete tombs.

Exhibition:  This unique exhibition spans Rodrigue’s entire oeuvre, including Landscapes, Cajuns, and Blue Dogs, as well as selections from Bodies, a late series of female nudes inspired by New Orleans’s historic cemeteries.  An accompanying wall text and extended labels provide detailed background information on the works, including quotes from the artist.

“I try to show that the tombs and the people are very much alike,” explained George Rodrigue about his paintings. “They both are suspended.  They both are painted the same.  They both have the same texture, and they both are locked in south Louisiana.”

Paintings include A Sea Chest of Secrets (1984), Rodrigue’s representation of Pirate Jean Lafitte; the iconic Watchdog (1984), the first Blue Dog painting; and Bat Dog (1991), featured on the cover of October’s Where Magazine, New Orleans.

READ MORE about tombs in George Rodrigue’s life and art.