Blue Dog: How a Cajun Legend Became a Pop Icon

Pop art is deeply rooted in the popular culture, products, and advertisements of the second half of the twentieth century.  A movement rich in symbolism, often there is one image that is inextricably linked to a particular artist.  Andy Warhol had his Campbell Soup cans, Roy Lichtenstein his enlarged comic book female heads, Wayne Thiebaud his pastries, and George Rodrigue (1944-2013) had his Blue Dog. 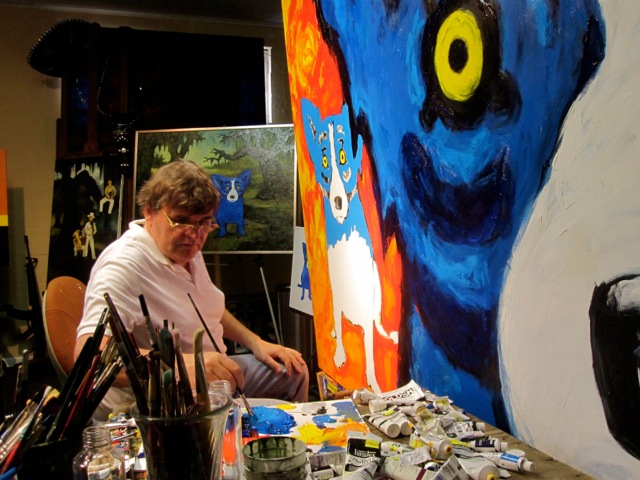 George Rodrigue in his New Orleans, Louisiana, studio in 2009.

However, unlike Warhol and many other artists working in this style who appropriated these images from the commercial world, Rodrigue distinguished himself in that his iconic image is not derived from popular culture but rather is personal and rooted in a theme that he explored in hundreds of works early in his career; his Cajun heritage.  The creation of Blue Dog can easily be viewed as a natural progression in his works which featured aspects of Cajun life and culture.

From the beginning of his career, Rodrigue felt strongly that his art should capture on canvas and visually interpret the history of the Cajun people. He was the first person to call himself a “Cajun” artist and began with a series of landscapes of Louisiana’s Cajun country which often included as a central focal point a large oak tree. 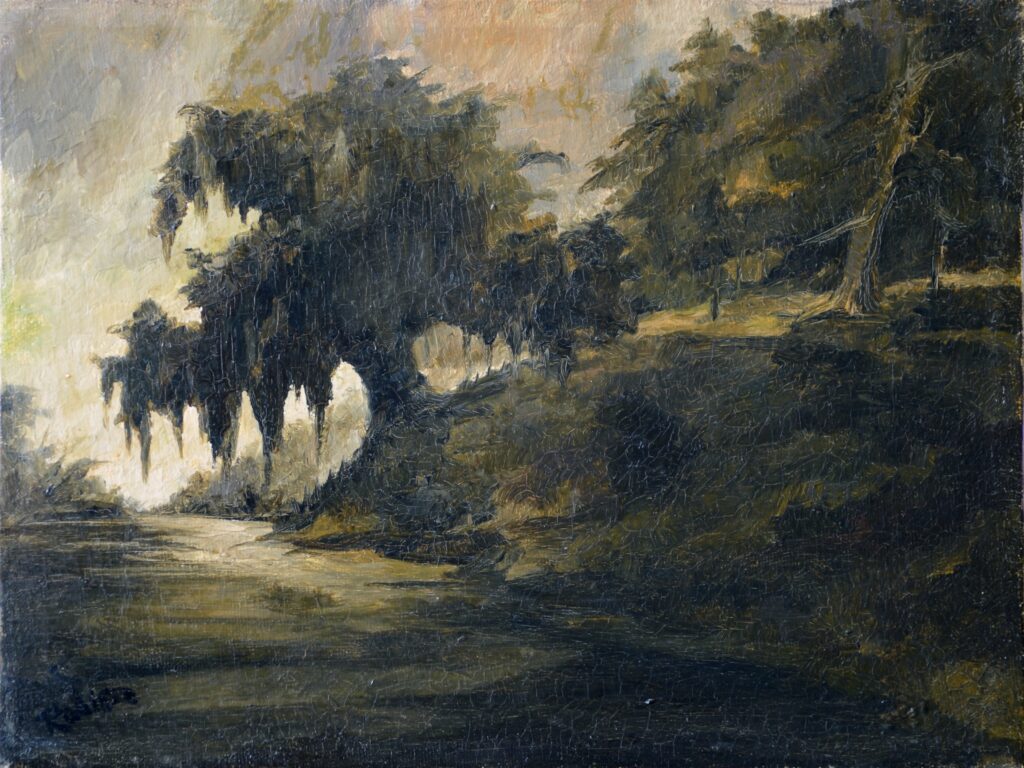 Later, the work progressed to include depictions Rodrigue’s ancestors — Acadians forced to flee their home in Nova Scotia by the British in 1755, during what the French-speaking Cajuns called Le Grand Dérangement. Settling along the Atchafalaya Basin near the Gulf of Mexico in Louisiana, they struggled to find comfort and make a home in this new land. Hence, they are often rendered in a pop art-like style of flat white figures that appear to be pasted into the landscape. 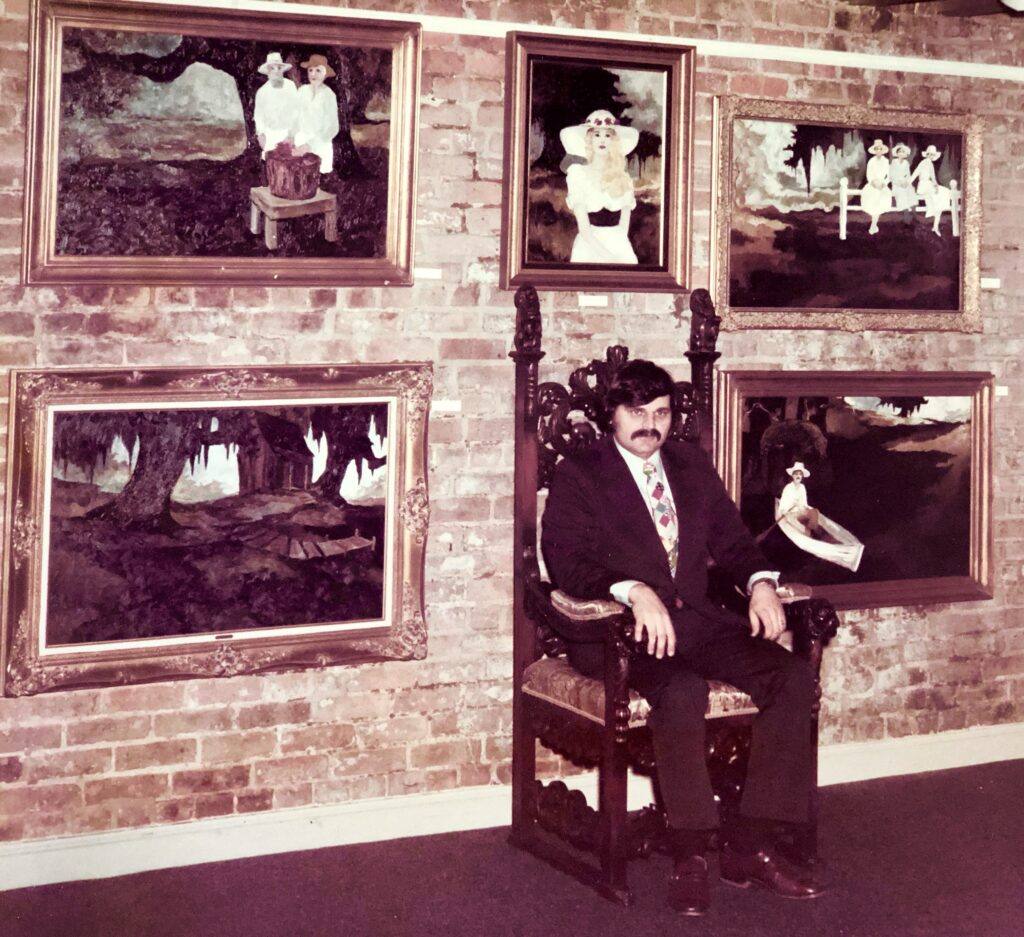 George Rodrigue Cajun exhibit at the Kurt Schon Gallery in New Orleans in 1974.

The Blue Dog was born of this pursuit as well when in the early 1980’s Rodrigue was commissioned by an investment group in Baton Rouge to illustrate a book of Louisiana ghost stories to be sold at the 1984 World’s Fair in New Orleans. This book, Bayou, featured images of original paintings by Rodrigue; one for each of the forty stories included in the publication.

For one of these stories, Rodrigue chose to paint the loup-garou who, according to legend, is a cursed human who transforms into a werewolf under the full moon.  A French and Cajun version of the bogeyman myth; it was a story familiar to Rodrigue who remembered how early in his childhood his mother would tell him if he was not good during the day then the loup-garou would come and get him that night.

As was often his practice to use photographs as foundations for his paintings, Rodrigue began looking through his pictures to find an image he could use as inspiration for this loup-garou painting.  What he found was a photograph of his deceased studio dog, Tiffany, from which he used her shape and characteristic stance as a rough outline for his interpretation of the loup-garou.

Tiffany, photographed by Rodrigue circa 1974.

As the threat of the werewolf beast occurs at night, Rodrigue painted his dog under a bluish moon which gave it a blue-gray color.  He completed the painting, Watchdog, by having the loup-garou stand on the first of a row of shockingly white stone slabs that lead back to a blood red colored house with his often depicted oak tree looming ominously in the background. 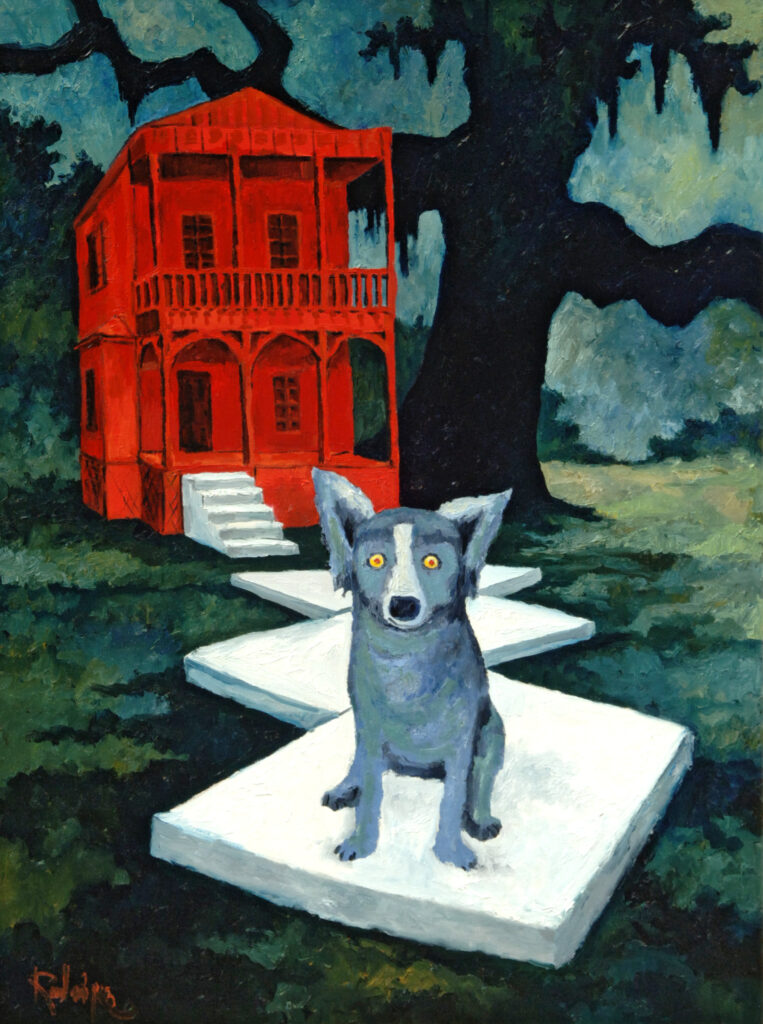 Wishing to explore this new image further, after the book was published, Rodrigue spent the next four years making several paintings of the loup-garou.  However, it was not until a selection of these paintings were included in a 1988 Los Angeles exhibition and Rodrigue overheard visitors referring to them as “blue dog” paintings that there was a shift in how he thought about his interpretation of the loup-garou.

He began to consider what this dog could be on its own and, when he eventually released it from the anchor of its Cajun legend, Rodrigue became free to think of his Blue Dog as a new and unique image.  Acknowledging this artistic re-imagining during the early 1990’s, Rodrigue once stated, “deep in Blue Dog’s eyes will always lurk the hopes and longings of a melancholy people, but, like the Cajuns, who always trained their eyes on the future, Blue Dog must move forward.” [i] 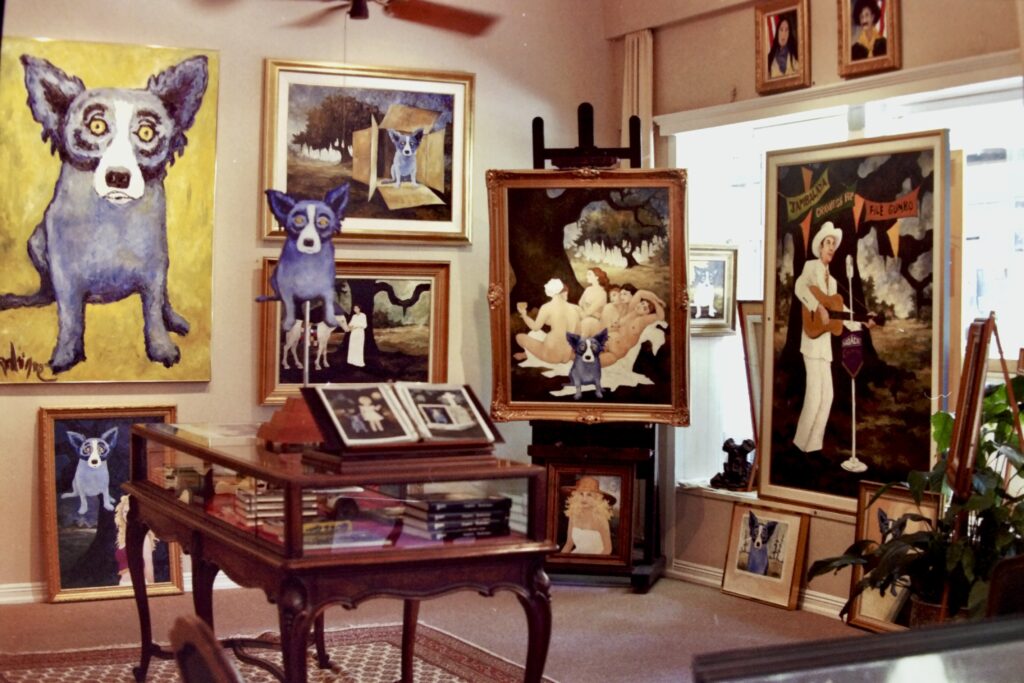 The journey Rodrigue took to discover how Blue Dog would evolve was worked out in true artist fashion on thousands of his canvases over many years.  A chronological viewing of his Blue Dog paintings created during his decades-long career will show this evolution beginning with Rodrigue’s placement of Blue Dog in the Louisiana landscape as in the painting Cosmo’s Dog in the 1980’s; 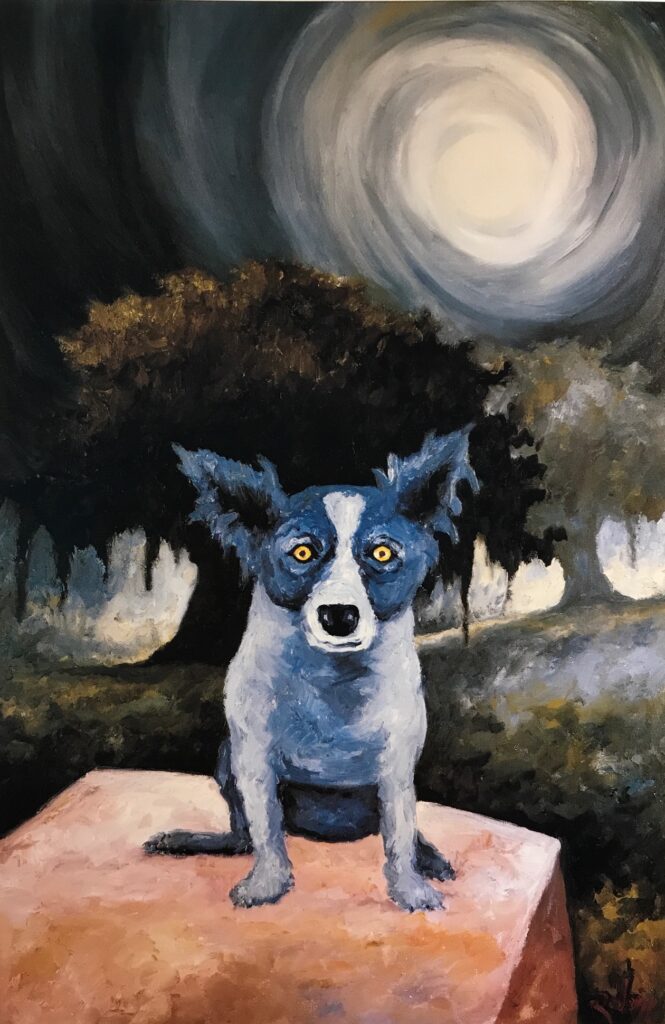 to works in which Blue Dog stands alone and untethered to any object or thematic setting such as in Loup-garou (the first ever Rodrigue painting without an oak tree) in the 1990’s; 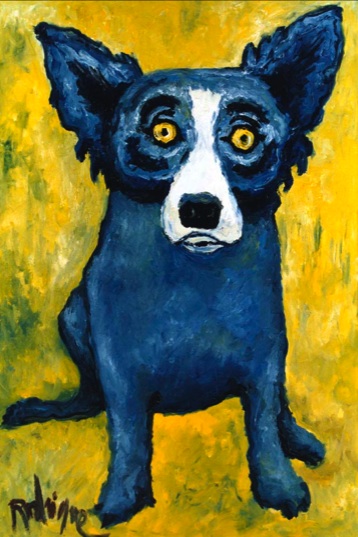 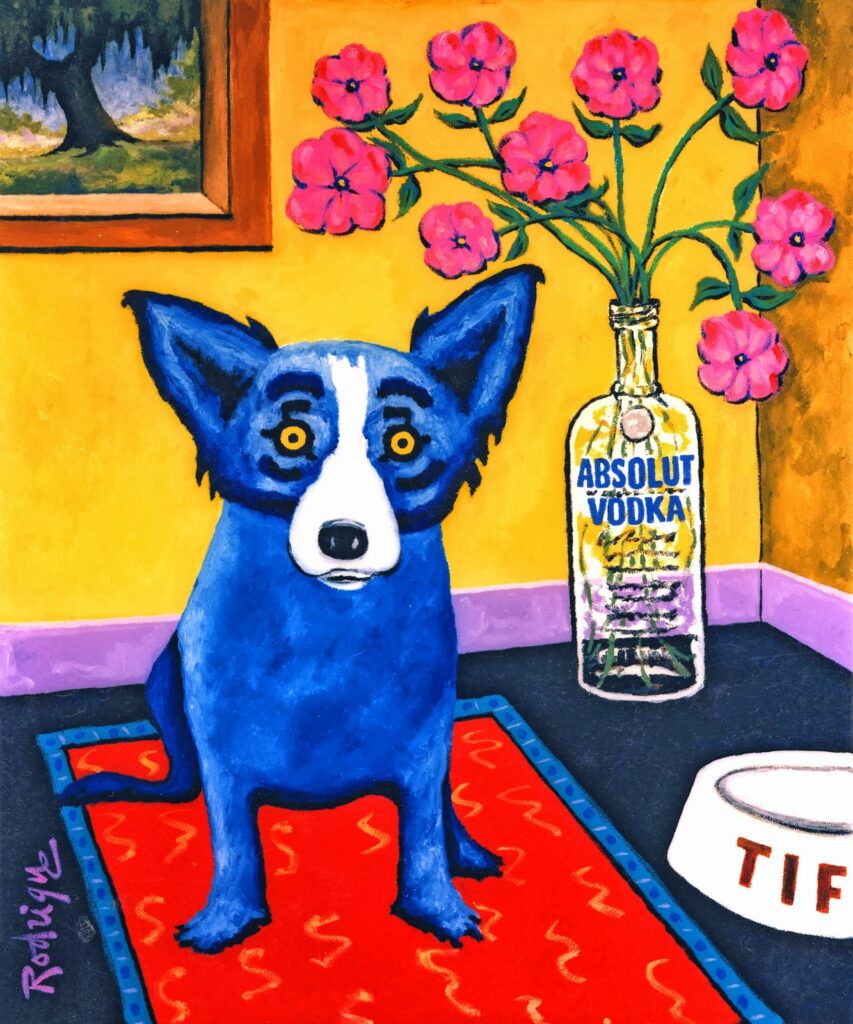 to eventually more abstract and minimalist interpretations in the 2000’s using simple blocks of colors and shapes culminating in works such as the quintessentially pop art rendering Consequences.

George Rodrigue at the Pensacola Museum of Art in 2004 with Consequences, 2002, Acrylic on canvas, 46 x 46 inches, Private collection

However, as someone who was interested in re-visiting prior themes in his work, Rodrigue also often found time to allow the now unmistakably pop image that was Blue Dog to reconnect with his loup-garou origins by placing it in settings of the Louisiana landscape.  Such is the case in one of the artist’s final paintings, Springtime is a ‘Comin’, in which he provided a visual reminder of Blue Dog’s odyssey from his Cajun roots to that of American pop icon. 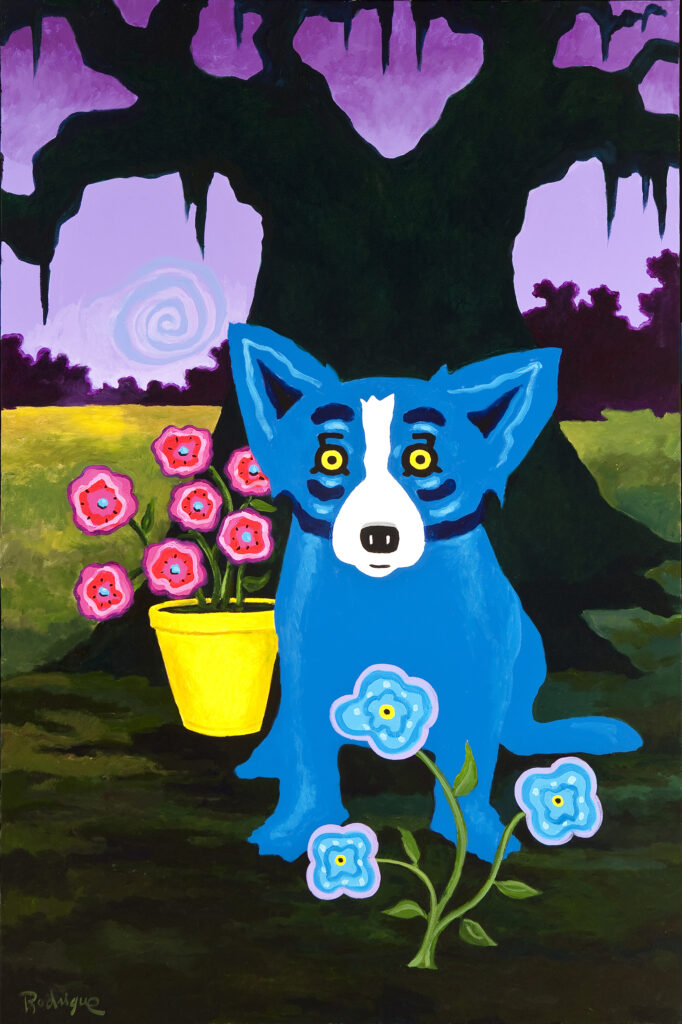 Ultimately, before his death in 2013, Rodrigue saw his pop art creation move beyond popular acclaim and garner critical recognition in several retrospective exhibitions. In showings at the New Orleans Museum of Art, the Acadiana Center for the Arts the LSU Museum of Art and others, scholars examined Rodrigue’s entire oeuvre in one space for the first time by displaying nearly one-hundred original works in each show that traced the evolution of the artist from his oak trees to Cajuns to loup-garou and to Blue Dogs. As time progresses and other institutions more closely study Rodrigue, there will be an even greater understanding of the artist’s work, his visual evolution from the Cajun legend to pop art icon and the story’s unique place in the history of twentieth and twenty-first century art.

The New Orleans Museum of Art’s “Rodrigue’s Louisiana: Forty Years of Cajuns, Blue Dogs, and Beyond Katrina” in 2008.

The artist presents a lecture at Acadiana Center for the Arts’ “George Rodrigue: Legends and Lives of Acadiana” in 2009