Evangeline: Evolution of an Icon (Exhibition)

Located in South Louisiana the West Baton Rouge Museum will host the exhibition Evangeline: Evolution of an Icon, highlighting George Rodrigue’s depiction of Evangeline both in his Cajun and Blue Dog series of works. 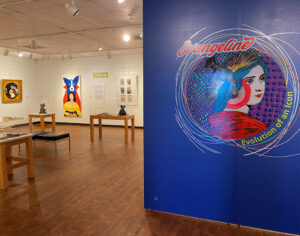 Henry Wadsworth Longfellow never stepped foot in the lands of the Acadians, yet the heroine of his epic poem titled Evangeline, A Tale of Acadie became embedded in the history and culture of Louisiana and Nova Scotia. Longfellow’s poem received international acclaim when published in 1847. The public was fascinated with the story of a young Acadian maiden separated from her fiancé on her wedding day during the brutal deportation of the French-speaking people from Acadia, and her epic journey to find him. The success of Longfellow’s poem launched Evangeline into literary stardom and into the hearts of the Acadian people themselves. Uniting the Acadian people of Nova Scotia and Louisiana, Evangeline’s name and image became a symbol of Acadian and Cajun cultural identity.

This exhibition, organized by the West Baton Rouge Museum, provides a glimpse into Evangeline’s evolving status from her inception through today as a legend and heroine, to a brand image and celebrity, and ultimately into a cultural icon. Inspiring writers, artists, musicians, and entrepreneurs, Evangeline has appeared in many guises. Along the way, her image morphed from that of a demure Victorian-era maiden into a confident modern woman. This exhibition includes artworks by Canadian and Louisiana artists, including François Gaudet, Rémi Belliveau, Melissa Bonin, and George Rodrigue, as well as artifacts and paraphernalia to demonstrate Evangeline’s transformation and her timeless appeal. The exhibit opens Saturday, May 15 and runs through October 31st. 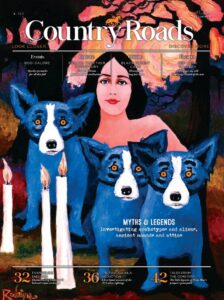 Three articles in October’s Country Roads Magazine including the cover are presented in celebration of West Baton Rouge Museum’s Evangeline: Evolution of an Icon exhibit:

On the Cover: “Virtual Reality” via Country Roads Magazine