Before the Blue Dog: The Cajuns of George Rodrigue and Their Relevance 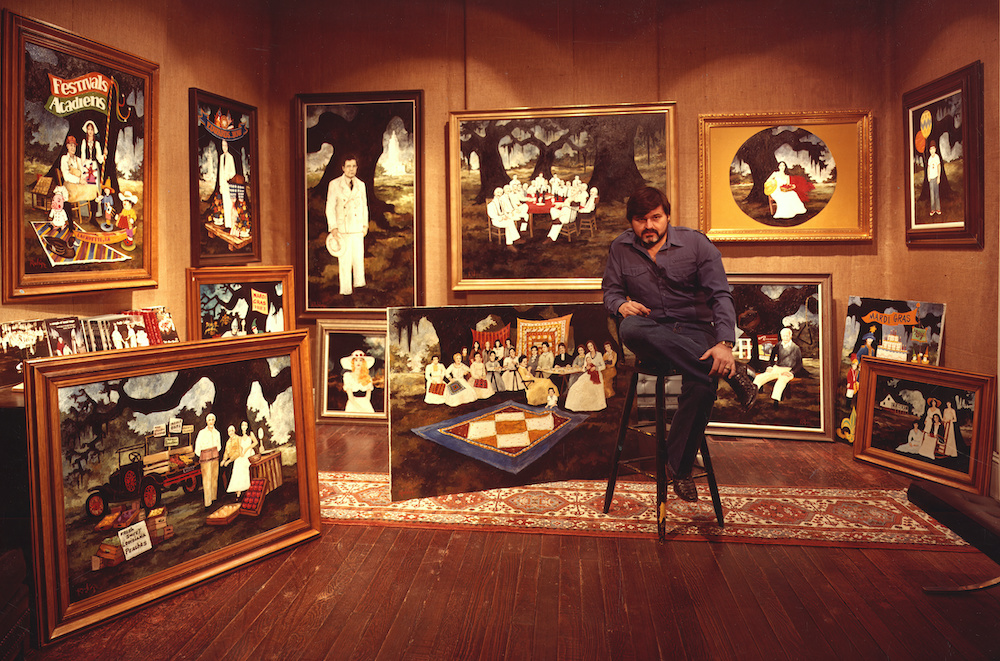 George Rodrigue surrounded by many of his best known Cajun works in his Lafayette, Louisiana, home gallery and studio circa 1988

Most artists who achieve popular success are recognized for a single body of work. Fewer artists have achieved that success from two distinct series. For George Rodrigue (1944-2013), the paintings that came before the iconic Blue Dogs he painted for three decades were his Cajun paintings. This body of work represents the landscape, stories, culture, and folklore of Acadiana and south Louisiana. In choosing to focus his efforts on Cajun subjects for over two decades, Rodrigue embarked on a mission to celebrate and preserve a culture that remains among the most unique in the United States but which had been largely outside the register of fine art before his efforts.

George Rodrigue in his Lafayette, Louisiana studio circa 1985

Born and raised in New Iberia, Louisiana, in the heart of Cajun country, George Rodrigue knew from an early age that he would become an artist. His initial inspiration to paint came during a childhood bout with polio at age nine, and he pursued this vision seriously, taking classes with a local artist and via correspondence courses as a teenager. He entered University of Southwest Louisiana in Lafayette (now the University of Louisiana at Lafayette) to study art in 1962, followed two years later by enrolling in the prestigious Art Center College of Design in Los Angeles (now in Pasadena) in 1964 (which accepted Rodrigue to its graduate program despite his not having finished his college degree). There, he studied intensively with instructors such as Lorser Feitelson, a pioneering figure of modern art in Los Angeles. Feitelson, an abstract artist, inspired Rodrigue to adopt a hard-edged style of crisply defined shapes and contours. In addition, he was in Los Angeles at an exciting time for contemporary art on the West Coast, exposing him to the latest development of Pop Art, which would have a long-lasting impact on his art.

In 1967, motivated in part by the death of his father, Rodrigue returned to Lafayette, Louisiana. Soon devoting himself full-time to artmaking, he turned to painting the unique landscape of the region. He began developing the motif of the oak tree, which would serve a background and central image in his paintings for the next several decades. Painting the tree close in, composed with dark earth tones and greens and a horizon line high up on his canvases to evoke the low, dense growth of the Acadian landscape.

Over the next few years in paintings like Aioli Dinner (below), he would populate his compositions with scenes of Cajun people of the past. The French-speaking Acadians, later referred to as Cajuns, were forced to flee their home in Nova Scotia by the British in 1755, during the Le Grand Dérangement. Settling along the Atchafalaya Basin near the Gulf of Mexico in Louisiana, they struggled to find comfort and make a home in this new land. Rodrigue represented them in stark whites and bright tones that contrast with the dark hues of the background as if they were cut and pasted onto their new home landscape. He chose to focus his efforts on painting Cajun tradition as an act of preservation, stating: ”The culture was eroding and disappearing. I wanted to preserve that heritage, and I started painting the people I knew.” [1]

The Class of Marie Courregé (1972) also exemplifies the style and subjects of Rodrigue’s early Cajun paintings. Under a dark shade of an oak, the artist depicted three rows of young women, basing them on the actual class photo of his mother from 1926 (below). As Rodrigue explained: “Marie Courregé is my mother. [bottom row, third from right] I show her with her school class to show the unity of the Cajuns, their determination to go forward, their desire to embrace the flag of America.”

Rodrigue quickly achieved international recognition by the mid-1970s, exhibiting The Class of Marie Courrege (1972) in the prestigious Salon organized by the Société des Artistes Français. There, Rodrigue was awarded an honorable mention, one of only five awards given that year. His work prompted Le Figaro to declare him to be “America’s Rousseau.” This declaration is an extraordinary one, as it links Rodrigue’s work to the influential French artist Henri Rousseau, one of the best-known French artists of the turn of the twentieth century. Self-taught, Rousseau was an inspiration to artists like Pablo Picasso, who held a banquet in his honor that was attended by major figures of the Parisian avant-garde, and to the next generation of French artists who developed Surrealism. Looking at Rousseau’s paintings like The Artillery Men (below), it is clear to see why Le Figaro might compare their work. Like the Parisian artists who drew inspiration from Rousseau, Rodrigue developed a technique that is a sophisticated take on the flatness characteristic of folk art.

In 1976, the artist published The Cajuns of George Rodrigue (1976), a book featuring 100 of his paintings in a large format with painting descriptions in both English and French. The first national book to cover Cajun culture, it received widespread attention and led Rodrigue to release several more books featuring his work.

George Rodrigue and son, Andre, with the artist’s early books on Cajun culture circa 1988

Over the course of the 1980s and into the early 1990s, Rodrigue continued his Cajun paintings, creating his notable Saga of the Acadians from 1985 to 1989, a series of fifteen paintings that chronicles the Acadian exodus from France to Nova Scotia.

The Saga of the Acadians on display at the Bayou Teche Museum in Rodrigue’s hometown of New Iberia, LA, in 2017

He also painted prominent figures from the past and present with ties to Louisiana, painting notable country, jazz, and zydeco musicians, Chef Paul Prudhomme (below), Hank Williams (below), public figures, writers and academics.

In the latter category is his remarkable portrait, Cleanth Brooks for Robert Penn Warren (1988), done for the Flora Levy Lecture Series at the University of Louisiana at Lafayette. Rodrigue painted literary critic, Cleanth Brooks, for his lecture on Robert Penn Warren, a Southern poet, novelist, and academic. Brooks stands before an oak tree and is flanked by Warren’s novel All the King’s Men (1946). Inspired by the notorious Louisiana governor Huey Long, whom Warren observed while teaching at Louisiana State University from 1933 to 1942, the book won the Pulitzer-Prize and is widely considered among the greatest American political novels. Surmounted by a line of men in the white linen suits and straw hats favored by Long, the novel’s cover features the Louisiana State Capitol and, shockingly, a river of blood that marks where Long was assassinated on the capitol’s steps that spills out into the painted landscape.

George Rodrigue furthered a tradition within American art developed earlier in the century by artists known as the Regionalists, including figures like Grant Wood, Thomas Hart Benton, and Andrew Wyeth. Drawing from the compositional lessons of modernism but determined to create art that represents the traditions and folklore of specific regions, the Regionalists created a uniquely American art by emphasizing the uniqueness of specific regions in the face of the homogenizing forces of contemporary times. Eventually, by the end of the 1980’s, Rodrigue was considered all but the official Cajun artist tasked with leading many national broadcast news crews and media outlets, like NBC’s Today Show, on tours of Acadiana. His paintings and imagery became synonymous with South Louisiana and his home gallery in Lafayette became a cultural destination for anyone interested in the Cajuns.

Rodrigue Gallery in Lafayette, Louisiana, circa 1986

Like Wood’s vision of Iowa, Benton’s of Missouri, and Wyeth’s of Maine, Rodrigue’s paintings of this era present a vision of a culture specific to Acadiana, evoking the distinctive landscape and culture of the region. Unlike this earlier generation of painters, Rodrigue emerged as an artist after the advent of Pop art, and adopted some of Pop’s strategies of juxtaposition of forms and symbols and its repeated imagery that later also served the artist well in his development of his Blue Dog series of paintings. Originally created based on the legend of the Loup Garou, or werewolf, for a book compilation of Cajun ghost stories, Rodrigue’s Blue Dog became the artist’s second body of work to achieve popular success.

Tiffany, the artist’s studio dog, was used as the model for the first ever “Blue Dog” painting, Watchdog, 1984, Oil on canvas, 40 x 30 inches, Private collection