George Rodrigue’s original drawings reflect spontaneity with the interweaving of elements in one connected composition.

It was in 1960 that Coach Raymond Blanco, husband of former Louisiana Governor Kathleen Babineaux Blanco, famously threw George Rodrigue out of class for drawing. He sat in detention in the hallway of Catholic High in New Iberia, Louisiana and, rather than repeat the assigned lines, continued sketching, already with the knowledge that he was far more artistically than academically inclined.

George Rodrigue’s works on metal combine print, photography and varnish on large sheets of metal, resulting in unique combinations of his imagination and reality.

I blended the photographs and painted imagery onto metal surfaces, using archival ink on aluminum so that parts of the metal show through, such as the dog’s nose and areas of the swamp. They appear as raw metal, as does a two-inch border around the final artwork.
– George Rodrigue

All editions are digital prints remastered by George Rodrigue from his original paintings, authenticated by his Official Estate Stamp.

Learn more behind the history of these stunning works by George Rodrigue, integrating the traditional nude female figure with a Modernist, Contemporary approach —in design, meaning, and production. 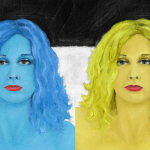