A one-of-a-kind creation by late Louisiana artist George Rodrigue will hit the auction block on May 22 as part of a two-day sale at New Orleans Auction Galleries, a leading regional auction company and trusted source of antiques and fine art for over 25 years. 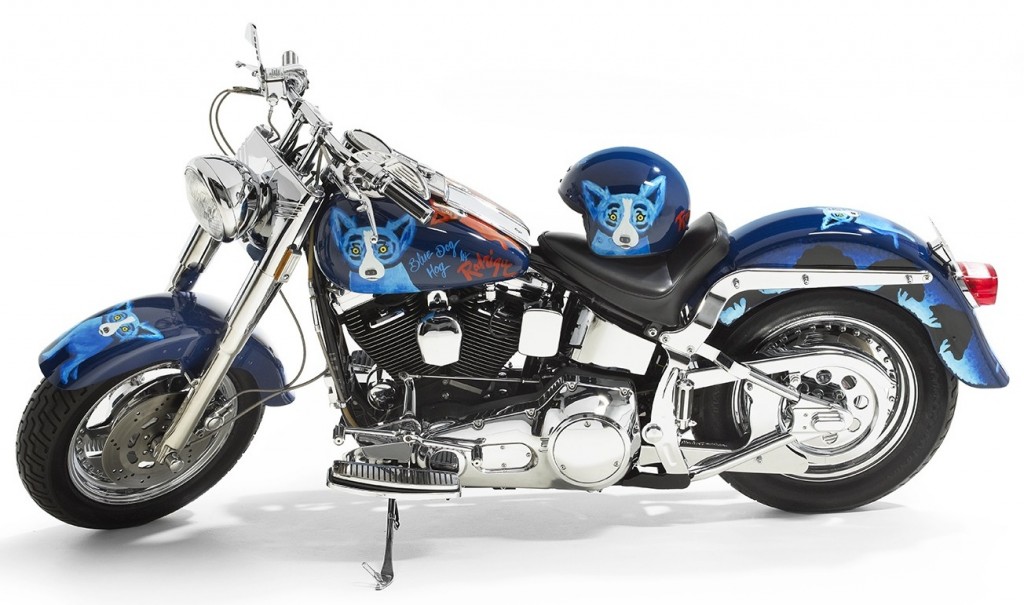 Rodrigue painted the Blue Dog Hog in 1994 using a Harley-Davidson Fat Boy motorcycle as his canvas, creating a unique showpiece for an exhibition at New York’s Time is Always Now gallery. Following the showing, the Blue Dog-clad Harley was displayed at the Rodrigue Gallery in New Orleans. The work became a popular attraction and photo opportunity until it was purchased by a Wisconsin collector; it has remained in private hands since.

Rodrigue, who passed away in 2013, began incorporating motorcycles into his paintings in the late 1980s. “Although not a rider himself, George related to the seduction of the open road and the notion of freedom and Americana attached to motorcycles,” explains Rodrigue’s wife, Wendy Rodrigue.

Estimated to fetch between $175,000 to $250,000 at the auction, the Blue Dog Hog features six of Rodrigue’s iconic Blue Dogs, as well as two Red Dogs flanking the tank’s center console, and oak trees dripping with Spanish moss along the back fender. It is signed on both sides of the tank. The motorcycle will 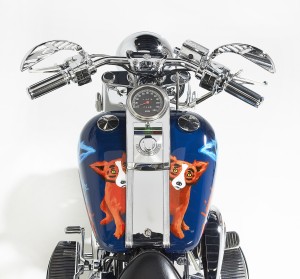 be sold with a matching helmet that includes two Blue Dogs and Rodrigue’s signature.

According to Wendy Rodrigue, the Red Dog first appeared in 1990 as the Blue Dog’s alter ego, a reference to the loup-garou, a werewolf or ghost dog that first inspired the now-famous image. Although George intended the motorcycle as a work of art as opposed to a means of transportation, he positioned the Red Dogs just below the speedometer, cleverly tempting the rider to fully enjoy the open road.
LEARN MORE

“As a longtime admirer of George Rodrigue’s works, the Blue Dog Hog is unlike any piece by the venerable artist I have seen,” said Susan D. Sarofim, CEO of New Orleans Auction Galleries. “This impressive and important work is truly exceptional, and this auction holds an unprecedented opportunity for collectors to own one of Rodrigue’s most unique creations.”

The auction begins at 10 a.m. on Saturday, May 21 and Sunday, May 22, at New Orleans Auction Galleries, located in the city’s historic Arts District. VIEW CATALOGUE

New Orleans Auction Galleries will be open for exhibition May 9-20 from 9 a.m. to 5 p.m., Monday through Saturday. A cocktail reception – which will be open to the public and will offer a preview of the lots, including the Blue Dog Hog – will be held on May 19, from 5-8 p.m. For more information, contact New Orleans Auction Galleries at 504-566-1849 or [email protected].